The land for Palmer Park was given to the town in 1889 by the Palmer family, proprietors of the Huntley and Palmer’s biscuit factory.  The Reading Standard on June 6, 1908 included a photograph of the completion of the first municipal bowling green in Reading at Palmer Park. The following week the Reading Standard included a photograph of the opening of the green by his worship the Mayor of Reading (Councillor W. M. Colebrook) on June 8, 1908. The company included a number of well-known local bowlers and the first match was played between an augmented team of Borough Officials and a team of Reading Bowlers from Suttons, Reading and Hurst bowling clubs, the Biscuit Factory and West End. “ The Corporation, as was expected, were well beaten.” 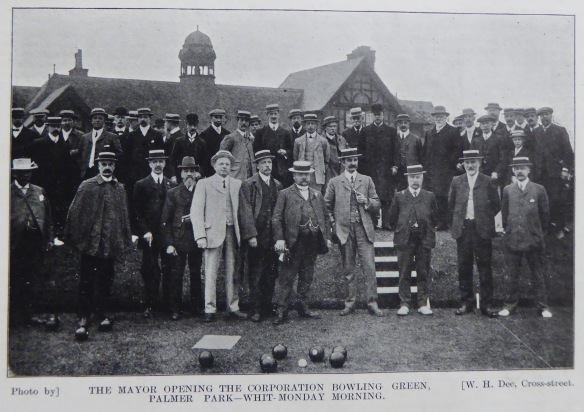 The Palmer Park Bowling Club was founded  in 1910 and became a founder member of the now, ‘Royal’ County of Berkshire Bowling Association.